Capturing chaos: a fast, stochastic, and scalable approach to Lorenz-96

Capturing chaos: a fast, stochastic, and scalable approach to Lorenz-96

Proposal in one sentence:

My group and I are building a fast and automated approach to chaotic dynamic systems and we want to test it on the Lorenz-96 problem.

Description of the project and what problem is it solving:

Over the past decade, extreme weather events have increased and in the US there were $145 billion in damages and 688 deaths in 2021 alone [1]. The unpredictability of atmospheric phenomena is growing. Weather is regarded as a chaotic system because the smallest of errors in forecasting spiral into much larger errors over time. This is a major challenge for weather forecasting and we believe our group is in a good position to tackle it in a new and potentially better way. We have compared our methods to two common neural net based techniques used in dynamic systems modeling: long short-term memory (LSTM) and gated recurrent unit (GRU), using an experimental dynamic system, ‘Casaded Tanks’, as a benchmark. We saw that our results were more accurate and took a fraction of the time to compute. [3] In our preliminary testing we have also seen that we have performed promisingly compared with SINDy, a state-of-the-art method for modeling chaotic dynamic systems. This grant will enable us to focus on chaotic systems, starting with the Lorenz-96 model. Edward Lorenz formulated a relatively simple model of a chaotic system in his seminal 1996 paper [2]. Since then, the model has become a benchmark, tackled by many deterministic machine learning methods. Our group seeks to provide a solution by utilizing a Bayesian approach in a Gaussian Process (GP). The GP we use is faster and potentially more accurate for dynamic systems because it implements a Karhunen-Loève expansion. Our plan is to further compare our method to SINDy and other neural net approaches such as reservoir computing techniques on Lorentz-96 and other chaotic system benchmarks.

Our group has developed a less common type of Gaussian Process which is gaining attention recently [4]. Unlike other GPs our method utilizes a Karhunen-Loève expansion, more specifically a decomposed kernel BSS-ANOVA. The BSS-ANOVA is O(NP) in training and O(P) per point in inference where P is the number of terms included after truncation of the ANOVA/KL expansion and N is the size of the dataset. We have created a new type of Bayesian optimizer which quickly and effectively builds and trains the model, ensuring that P<<N. Because of its speed and accuracy combination for small-to-moderate feature space dimension sizes it is possible to model the derivative information in a dynamic system as a static problem, then to integrate the learned dynamic model given initial conditions and forcing function inputs to make predictions. This means it needs much less data to train accurately than a recurrent neural network, which learns patterns in the training data and makes predictions through those learned patterns.

When comparing our method to recurrent and deep learning neural networks we have seen more accurate results and faster computation time on a pair of dynamic system benchmarks. In a recent publication we compared our method to neural nets and some other methods for static prediction on the experimental Cascaded Tanks benchmark and a specially designed SIR synthetic benchmark [3].

The Cascaded Tanks problem is an experimental nonlinear dynamic system benchmark. In this problem there are two tanks and a reservoir. The upper tank is filled with water from the reservoir by a pump. A signal is sent to the pump to control the inflow of the water. A drain connects the upper tank with a lower tank, which in turn drains back into the reservoir. This system is moderately nonlinear in theory. In the static derivative estimation problem we compared with a residual deep network and a random forest, which we bested in accuracy as shown in Table-1. For dynamic prediction we compared our method to two neural networks: an LSTM and a GRU. Our method – which is not parallelized or optimized for speed – took an average of 20.22 seconds. The neural networks took an average of 175 seconds and 123 seconds, respectively. The results can be seen in Figure-1 and Table-2.

Additionally we tested both methods against a synthetic nonlinear benchmark dataset based on the nonlinear ‘Susceptible, Infected, Recovered’ system, in which the infectiousness parameter was used as a forcing function. The training set consisted of only constant values of infectiousness, while the test set contained varying functions. The GP was able to accurately replicate the training set behavior while the neural networks were not.

Figure 1: (a) LSTM and (b) our method predictions vs test data for the height of the water in the tank 1 in the Cascaded Tanks problem. Shaded region represents 95% confidence. 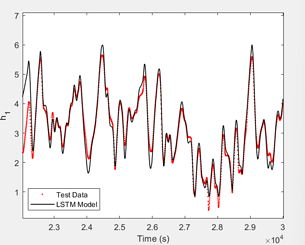 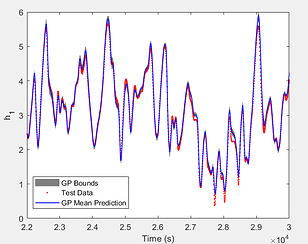 After completing this grant, we will look to expand our scope of benchmark problems, while starting with outreach to organizations who might stand to benefit from faster and more accurate tools for modeling chaotic systems. Computational Fluid Dynamics (CFD) models are a general class of chaotic systems we wish to model in the future. The market for accurately modeling CFD is valued to be over $2 billion [5]. This is because the application of CFD incompacess a wide array of topics. Just to name a couple: aerodynamics of a car and heat transfer of pipes. Chemical reaction networks (CRN) is another potential future research area. CRN models the behavior of chemical reactions and are also sometimes chaotic in nature.

Week 5-6: Extension to other models and the building of a public repository

First my team and I would like to thank the Algovera community for funding our research. This funding enabled us to focus on researching topics that were of heavy interest to our group.

Our research focused on modeling the Lorenz-96 problem and comparing our results to other methods. Modeling the Lorenz-96 problem is important because of its chaotic nature. Accurately modeling this problem has huge implications across a multitude of different industries. Chaotic systems appear in applications such as CFD, weather forecasting, and CRN. The valuation of these industries is over $4 billion dollars.

To accurately test and compare to SINDy, equal test conditions were established. The data was first produced from a Lorenz-96 simulation based on the following function.

The simulation ran with a time step of 0.05 seconds over a 30-second period; it was fed five initial conditions and a forcing function. From this the x and the ẋ were split into x and y respectively. The data was then split into 67-33 split for train and test. For SINDy the train of the x and the train of ẋ were both fit to the model. For BSS-ANOVA, the train of the x states were set as inputs and the first ẋ was put into the output. For example, the first derivative has inputs such that

So, the third state did not directly affect the derivative and was therefore not included. This pattern was repeated for 4 more models of the remaining ẋ.

After this, each method will be evaluated by comparing the real derivatives to the derivatives predicted of both methods. Then, the modeled derivatives will be integrated back to their x states; and these states will be compared to the original simulation. This is where our group ran into issues. SINDy would seemingly not be able to integrate back to x. This was because SINDy used the method LSODA and it would not be able to converge and find a valid solution. LSODA was then heavily constrained and would still not produce results. In addition to this, adding any noise would cause SINDy to produce radically inaccurate results. Our method was able to model the derivative and integrate with higher levels of accuracy. The results from both methods can be seen in the tables below. 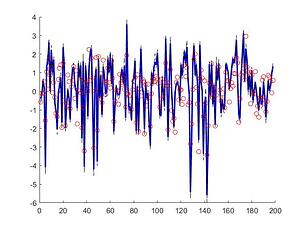 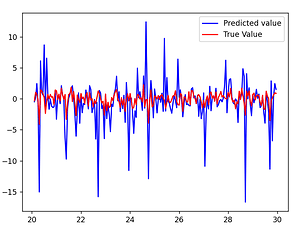 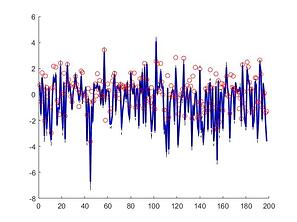 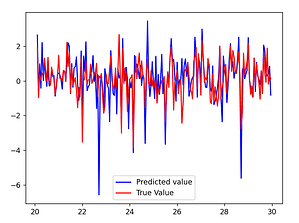 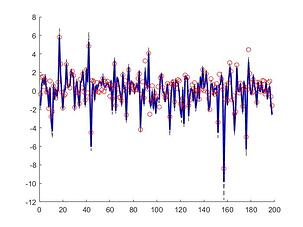 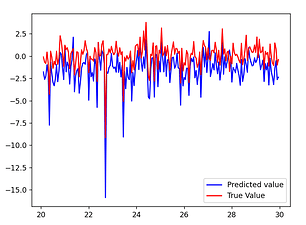 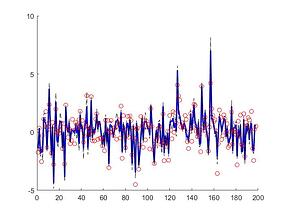 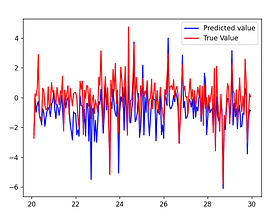 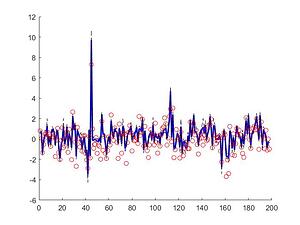 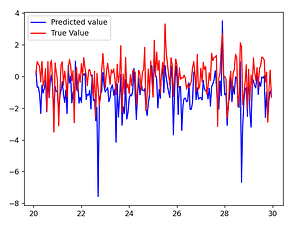 The models created with BSS-ANOVA show very promising results. They were created with a routine that was just revamped recently, so these preliminary models can be improved to match more real-world conditions. For example, in its current form, small amounts of noise were added to the training and test data, and its results were still strong. Further tuning of our hyperparameters (i.e. our priors) will allow BSS-ANOVA to accurately model with more realistic data. SINDy had higher MAE and RMSE when compared to BSS-ANOVA. This can clearly be seen in every figure. SINDy had an issue with correctly predicting the derivative and exaggerated the value by a large amount. This created large extrema and therefore caused a large MAE and RMSE. This issue would then prevent LSODA from finding a valid solution and prevent integration.

This concludes our research for Algovera grant funding round 4. My group and I are extremely thankful for the opportunity to have received funding from the Algovera community. The code and data used in this research will be released later along with BSS-ANOVA itself.